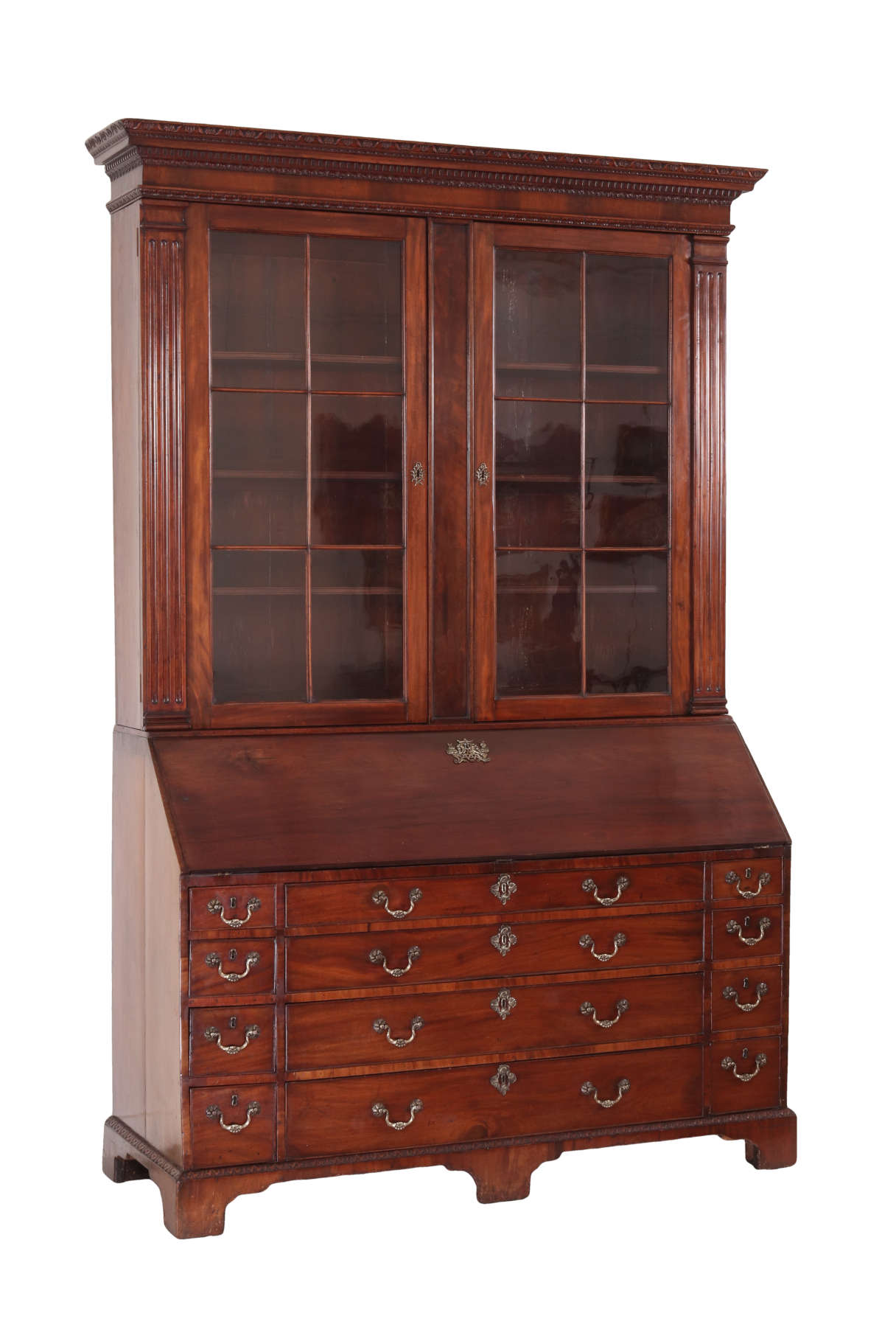 Large Irish George III mahogany secretary bookcase, the upper portion with an elaborate cornice carved with trailing shells, dentils and foliate moldings. The glazed doors with engaged fluted pilasters open to three fixed shelves. The desk portion has a figured fall-board opening to a tooled leather surface and interior fitted with pigeon holes and small drawers, centered by a quarter-matched prospect door and two document slots with brick-work inlay. The lower portion has an unusual drawer configuration of four long graduated drawers flanked by short drawers, each with replaced shell hardware, all on a carved molding raised on three bracket feet.

Condition: Refinished in the early 20th c, when all of the brass hardware was replaced. The 12 panes of glass appear original. Repair around the lock of the fall-board, as evidenced by the dark area visible in the photos.

The doors, of an otherwise standard dimension, were widened by the addition of the engaged pilasters and further separated by the fixed center muntin. The fluting of the pilasters lightens the effect, as does the molding around the muntin, the profile of which matches the mullions. Interestingly, the addition of the muntin had the consequence of fixing the three shelves.

The problem of widening the lower portion was solved by the addition of the flanking side drawers, allowing the cabinetmaker to extend the overall width by 17 inches while adding considerable storage. All this necessitated the addition of a center foot, for both structural and aesthetic reasons. Note how the pilasters and muntin harmoniously align with the feet

This remarkable secretary displays many details characteristic of Irish furniture. In their book, Irish Furniture, Desmond FitzGerald and James Peil state, "Irish furniture sometimes appears to be behind prevailing fashions in England"They state further, "The shell motif is particularly common..". Thus we see the trailing shells in the cornice, a motif that was out of favor in England by the 1780s and somewhat incongruous with the neoclassical dentil molding and fluted pilasters. Shells were a common motif on Irish furniture throughout much of the 18th century, so while it would not be seen on English furniture at this date, it is not surprising to see it employed here. Bolstering the Irish origin is the presence of the small drawers on the lower section. Whereas, the English cabinetmaker would have preferred doors, as seen in plate CVIII in Thomas Chippendales's "The Gentleman's and Cabinetmaker's Director (reproduced here), FitzGerald and Piel state, "small drawers flanking long drawers on the chest section is a common feature on Irish chests." Finally, Irish furniture has the reputation for being very dark, nearly black, which this piece clearly is not. The authors explain that in the 18th century Irish mahogany furniture was left the reddish color of the natural wood, that the thick black varnish was added in the 19th century during the Elizabethan revival in the Victorian era. Any varnish that was on this secretary, Victorian or otherwise, was removed when it was refinished in the early 20th c. At this time, the interiors of the drawers were varnished, and the hardware replaced, leaving it the way we see it today.