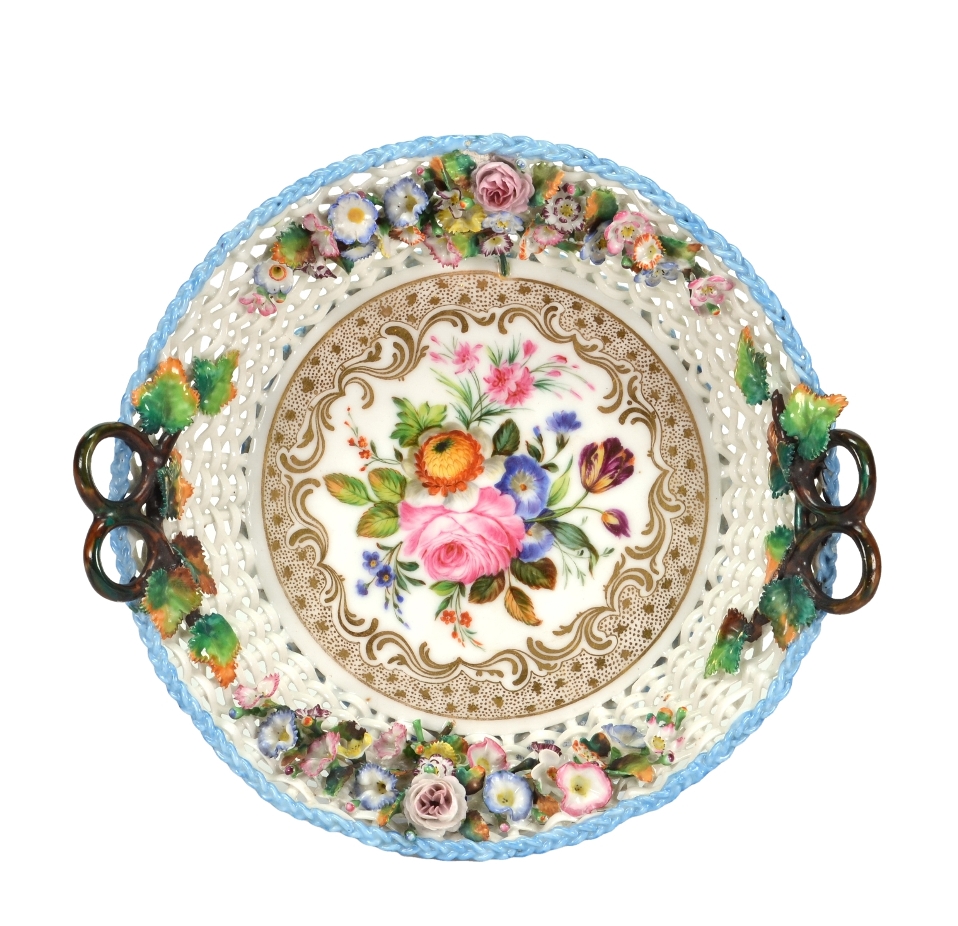 Constructed entirely of porcelain and woven by hand, this fantastic basket represents Jacob Petit at his most flamboyant.

Jacob Petit (1796-1868) was one of the more innovative and controversial figures in the history of French porcelain. Born Jacob Mardochee in Paris in 1796, he took his wife's name when he married Anne Adelaide Petit. He studied painting in the atelier of Antoine-Jean Gros and later traveled across Europe designing and painting opera sets. He returned in 1830 and purchased the porcelain factory at Fountainebleau, 40 miles south of Paris, in 1834.

Within four years, Petit had abandoned "plates, dishes [and] commonplace implements" to focus entirely on ornamental objects, giving free rein his theatrical training. Porcelain scholar Regine de Guillebon describes Petit as, "an inventor" who "excelled in the field of decoration. His drawings and his porcelain are seething with ideas; he combined Gothic, Rococo and neo-Classical styles." Yet, despite his enormous popularity, the critics had difficulty with his wares. Commenting on a mantelpiece made entirely of porcelain that he exhibited in 1834, a judge stated, "We are bestowing the honourable mention upon M. Jacob Petit not for the weird and difficult outlines with which he endows most of his pieces, but for the boldness of execution with which these difficulties are overcome."[1] That critic might well have been referring to this somewhat weird and, most certainly, boldly executed basket.

Not satisfied with a molded basket, Petit weaves his from porcelain osiers and braided trim, a seemingly impossible task and just the type of virtuosic showmanship that raised both the ire and admiration of the aforementioned critics. Likewise, for the applied leaves and flowers- each delicately, if not excessively wrought and painted. The gilding and the bouquet of flowers are equally fine and lavish.