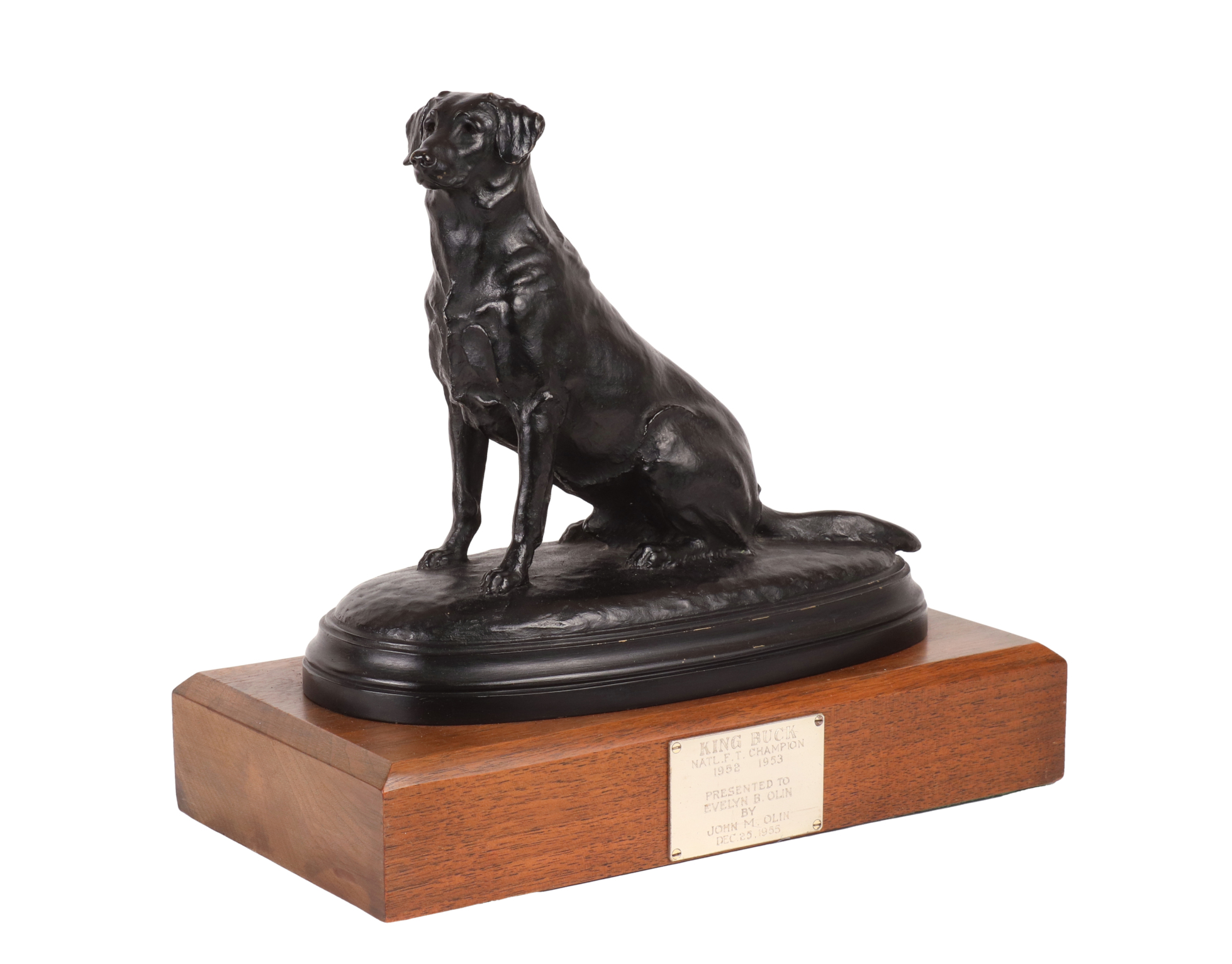 Condition: Beautiful patina with minor losses to the black surface throughout.

King Buck (1948-1962) was a legendary Labrador retriever who lived a rags-to-riches life worthy of a Hollywood movie. Born in Iowa in 1948, he was small for his breed and remained unsold at the end of his basic training. He nearly died of distemper. But his owner nursed him back to health and, recognizing his potential, prophetically named him King Buck. John Olin (1892-1982), an Illinois business magnate and outdoorsman, bought the dog in 1951. A year later King Buck won the National Field Trials, earning him the distinction as the finest retriever in the nation. Incredibly, he repeated the performance the following year. During his career, King Buck completed 83 national events, of a possible 85. No other retriever before or since has completed more than 62.

The 1959 Federal Duck Stamp commemorated retrievers and their contribution to waterfowl conservation. A call to entry was made and wildlife artist Maynard Reece's watercolor portrait of the now retired King Buck was chosen, marking the first time a dog appeared on a U. S. stamp. (See photo.)

King Buck died in 1962 and he was honored again in 1992 when he was inducted into the Retriever Hall of Fame.

John M. Olin was born in 1892 in Alton, IL, the son of a businessman who owned a gunpowder mill. He joined the family business in 1913 and built it into a chemical and munitions manufacturing empire that made him one of the wealthiest men in America. An avid hunter, outdoorsman and conservationist, he founded Nilo Farms (Olin spelled backwards) in 1952 as one of America's first game preserves. It still operates today on 640 acres in Brighton, IL as one of the nation's leading hunting and wildlife refuges.

Olin sat on the board of the American Museum of Natural History in New York. It is possible that at this time he encountered the work of wildlife sculptor James Lippett Clark, who years prior had worked at the museum mounting specimens. Olin commissioned Clark to produce a life-sized statue of his beloved canine. That statue, completed in 1955, now marks Buck's grave at Nilo Farms. An edition of 15 small versions was issued and this copy was given by Olin to his wife Evelyn as a Christmas gift in 1955.